Praise for "Halfway Home: Race, Punishment, and the Afterlife of Mass Incarceration" by Reuben Jonathan Miller (Little, Brown and Company, 2021) 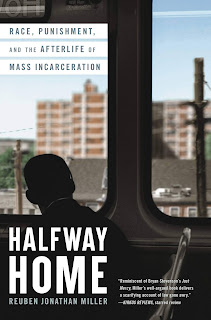 "[T]his is how social death works: You become a nonperson, someone whose existence is superfluous. You're invisible, hidden in some cage just outside the city or within it or perhaps hundreds of miles from home. The effects are all the same. You are a number among a bunch of other numbers. You might have a family. You might do great things in your community. You might help others, regularly. You might be a person of great faith. But you are dead to the world that matters to you most. The prison robs you of your importance."

The above quote is from Reuben Jonathan Miller's book titled "Halfway Home: Race, Punishment, and the Afterlife of Mass Incarceration." Miller is a sociologist, criminologist, social worker, and University of Chicago professor.

"Halfway Home" is a searing indictment of the pernicious ways that mass incarceration destabilizes lives by disproportionately demonizing, marginalizing, and warehousing people of color and members of poor and underserved communities.

The book highlights how lawmakers have erected barriers that prevent the 600,000 returning citizens marked by incarceration who are released from prisons each year from succeeding through the creation of 48,000 laws, policies, and administrative sanctions.

Miller also critiques the plethora of interlocking problems that have resulted in America becoming the country that cages more citizens than any other on the planet. His rich, descriptive narrative allows the reader to explore the world of prison and its "afterlife" in a very moving way.

In the words of Pulitzer-Prize winning author Heather Ann Thompson, "As Miller shows so powerfully [in his book], the damage done by this system has been so insidious, and so comprehensive, that certain Americans are always, in effect, doing time."

One of the qualities that makes this book so compelling is Miller's proximity to the problem. His father and brother were incarcerated, and he was actively a part of his brother's support network throughout his incarceration and release. He witnessed firsthand what families of incarcerated people experience during that time.

He also served as a Chaplain inside Chicago's notorious Cook County Jail where he interacted with thousands of people in detention and was able to directly observe how they were treated by their jailers.

The imprint of incarceration on Miller's life allows him to see and understand things other ethnographers often miss or overlook when they study the caging of citizens. He writes not only as a brilliant scholar, but also as a credible witness.

I'm critical of authors who write about the carceral system because too often they write through the gaze of a detached observer. As an advocate for incarcerated people and stakeholder in how we are portrayed, I'm not one to give a pass to authors who gaslight readers about the facts.

Too many writers seek to capitalize off the suffering and misery of the incarcerated experience. They frequently only review statistics and data points before arriving at conclusions and rarely engage with the subjects of their research.

As someone who has been caged in Michigan prisons 32 years and intensely studied the carceral system experientially -- including reading books, scores of peer-reviewed journal articles, and research studies on the subject -- I can unequivocally state that Miller knows what he's writing about.

Anyone interested in learning about the real struggles and lived experiences of currently and formerly incarcerated people and their families should read this book. It will open your eyes about things you didn't know and change your perspectives about things you thought you already knew.

(Efrén Paredes, Jr. is a blogger, thought leader, social justice changemaker, and Michigan juvenile lifer who has been incarcerated 32 years. You can find links to his writings, TV news/radio/podcast interviews, and activism by visiting http://fb.com/Free.Efren.)