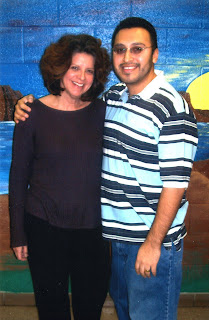 Saturday, January 20, 2007, Elena Herrada visited Efren Paredes, Jr. with his family for three-and-a-half hours at the G. Robert Cotton Correctional Facility. During the visit Elena and Efren discussed myriad issues. Efren was eager to meet Elena and learn about the various activities she is involved in. He had heard a lot about Elena over the years and the work she has done on behalf of Latino people and really admired her tenacity and commitment to helping people. Elena is co-chair and founding member of the Committee for the Political Resurrection of Detroit, which focuses on domestic human rights. She is a member of the Interfaith Committee for Worker Justice, she has worked at a SEIU local, and was the president of a RWDSU (Retail, Worker, Department Store Union) local. Elena is a contributor to the newspaper The Michigan Citizen, and is also a longtime advocate for Detroit's Latino Community.

A member of Latinos Unidos, in 2001 Elena produced a documentary film entitled Los Repatriados: Exiles from the Promised Land, about the depression-era deportation of Mexicans from Michigan. She also recently founded a new Latino Workers Center in Detroit, the Centro Obrero.

During Elena's visit with Efren she pledged to assist him, as well as his family and supporters, by joining The Injustice Must End (TIME) committee and combining their efforts to get justice for Efren. The visit went very well and was productive for all those present. Efren and Elena took a photograph during the visit which appears in this post.

On February 4, 2007 Elena disseminated an e-mail to her extensive list of e-mail contacts stating the following:

I wish to direct you to the web site of Efren Paredes, Jr., from St. Joseph, Michigan, who was sentenced to three life terms at age 15. I have joined his family in their efforts to get him a new trial or a commutation this year, in 2007. There are several reasons I am assisting in this effort, but I ask you to read the materials and sign his online petition.

Please share this information with your lists who may be willing to help get this young man out of prison. We will all benefit from his freedom. He is a valuable asset to those of us in the human rights struggle. Read some of his writings and see the person he is.

Regardless of these facts, Efren has been wrongly incarcerated as a child and is now 33-years-old. He has been in prison for 18 years and his family and friends have not give up on him. We, in the rest of the state, are being asked by Efren and his family to add our voices and resources to this case.

Thank you for your assistance in this matter.

On February 8, 2007 Elena dispatched an e-mail to Efren's family informing them of her intention to gather 1,000 signatures between now and March 15 to submit along with a commutation to Governor Granholm's office requesting Efren's release. She chose March 15 because it is the day Efren commences his 18th year of incarceration.

Elena will be fervently working during the next month to gather the necessary signatures in the Detroit area at various meetings and functions she will be attending. We are grateful for Elena's efforts and wish her much success with her with these endeavors. Please support Elena and our campaign to restore Efren's much deserved freedom.
Posted by The Injustice Must End (TIME)