Saturday, August 15, 2009 Efrén spoke to 160 youth via phone at the Second Annual Justice for Alwy 3-on-3 basketball tournament held at Carlton Park in Toronto, Ontario (Canada).

The event is dedicated to all victims of police brutality. It began in 2008 in remembrance of 18-year-old Alwy al-Nadhir, an unarmed teen who was shot and killed by Toronto Police on Halloween night, October 31, 2007 in Riverdale Park, Toronto. Click here to read more about how Alwy died.

After Alwy's tragic death his family, friends, and other local community organizers saw the need to get organized to put an end to the siege on their communities. Together, they created the Justice for Alwy Campaign Against Police Brutality.

Since Alwy's murder tensions between the police and youth have escalated, resulting in conflicts and additional acts of police brutality towards youth. Many Toronto urban youth have conveyed experiences about the daily harassment, false arrests, brutal beatings and verbal confrontations many have had with the police.

Efrén was invited to speak to youth at this year's Justice for Alwy basketball tournament by Pablo Vivanco, community activist and producer at Barrio Nuevo, a Latino community radio program based in Toronto. Efrén has previously appeared on two Toronto-based radio programs, Barrio Nuevo and Radio BASICS, to discuss his case and the imposition of life without parole sentences on juveniles. 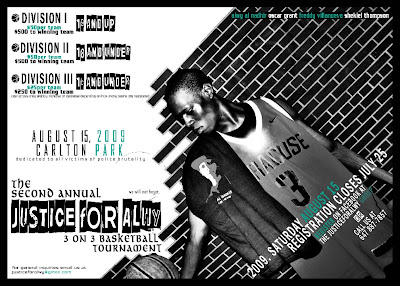 At the basketball tournament Efrén urged the youth to remain calm and exercise patience and restraint. He urged them to take a proactive approach to finding lasting resolutions to existing problems, and cautioned them against allowing themselves to be reactionaries responding to taunts and acts of aggression or unprofessional conduct by police.

Efrén told the youth that there would be serious consequences for acting impulsively and ignoring the future of their actions. He told them that they could end up like many prisoners he sees every day who are condemned to die in prison because of their impulsiveness and refusal to listen to reasoned advice.

During his message Efrén told the youth they should work to resolve conflicts intelligently and in a non-violent manner. He told them they should organize rallies and engage the community in meetings to bring attention to the injustices they are encountering. They can call on local and federal investigations, meet with legislators, file complaints against police officers, initiate legal action against them, and even file human rights charges against the violators in an international forum, if necessary.

Efrén wanted the youth to know that avenues for redress and improving matters exist. He did not want them to feel a sense of hopelessness and or believe that violence or rebelling were the vehicles for them to obtain an illusion of justice.

He told them if elected officials do not listen or respond to their grievances they can always seek to recall and replace them with officials who will fulfill the responsibilities of their office. There is a process for officials to take office, and a process for them to leave if they are ineffective or remiss in their duties.

The event was a success and it was a reminder to all who participated that through organizing and a shared vision we can create space and events we need to achieve a desired purpose.

As Efrén stated, "If the youth could all work together to organize the tournament in Alwy's memory, they can work together to make other things materialize in his honor as well. They just need guidance and encouragement along the way."

Efrén's voice transcending prison walls to reach the listening youth in Canada served to do just that.
Posted by The Injustice Must End (TIME)