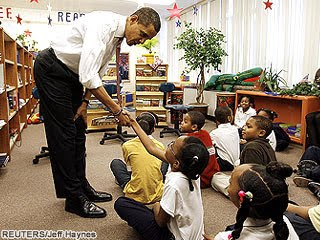 There has been a great deal of controversy surrounding President Obama's message to school children which will he plans to deliver to U.S. primary and secondary students via webcast and C-Span Tuesday, September 8, 2008 at 12 PM ET.

Many people initially objected to having President Obama deliver his speech. No such objection was made by Republicans when both George H.W. Bush and Ronald Reagan delivered their direct-to-the-classroom talks in the 1980s and '90s.

What is very disturbing about this manufactured controversy is the level of hypocrisy and intellectual dishonesty being exhibited by people protesting President Obama's message. Some have even tried characterized his message as an attempt to indoctrinate children using subliminal messages cloaked in socialist ideology.

To quell the concerns of parents and educators the White House released the text of the President's prepared remarks on Monday. President Obama wanted to give people an opportunity to review the speech before making a decision about whether or not to allow students to view his message live on Tuesday.

One of the President's staunch opponents of delivering his message was Jim Greer, the Florida Republican party chairman. Last week Greer accused the president of trying to "indoctrinate America's children to his socialist agenda."

After the text to the prepared remarks the President will deliver were shared with the public yesterday Greer now says he will let his children watch what he calls a "good speech," one the president "should give." 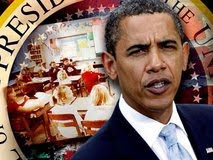 ded, "It encourages kids to stay in school and the importance of education and I think that's what a president should do when they're gonna talk to students across the country."

Obama's intentions for Tuesday is tantamount to a presidential pep talk about taking education seriously. The President's message is one that should resonate with every educator and parent across the country, and one that they should encourage children to view/hear.

People would be remiss in their responsibility to our nation's children to pass up this learning opportunity and positive message directed at encouraging children to succeed and do good in life.

Update 9/9/09: You can watch the video of President Obama's message delivered yesterday below.