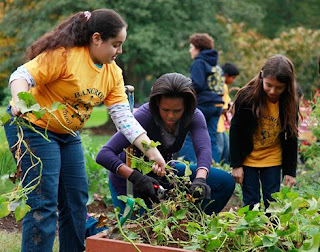 According to the Centers for Disease Control and Prevention, approximately 32% of children and adolescents (25 million kids) are obese or overweight. A 2005 study found that kids today may live shorter lives than their parents by two to five years.

Two important areas Let’s Move will target are improving food and increasing physical activity in school. About 31 million kids eat lunch at school every day, and 11 million eat breakfast there as well. It is estimated that 30% to 50% of their calories are consumed in school, underscoring the need to make improvements in this area.

I urge you to visit letsmove.gov and share the vital information and tools available there to help us create a healthier future for our nation’s children. Parents and educators especially need to learn about this information and we need to engage other adults who do not have children to learn it so that they can mentor kids about the value of physical activity and healthy eating.

Talking about this crisis is a start. Taking active steps to reverse this danger to young people’s lives is what we each need to be doing. Action, not talk, is the key to making a difference.
Posted by The Injustice Must End (TIME)