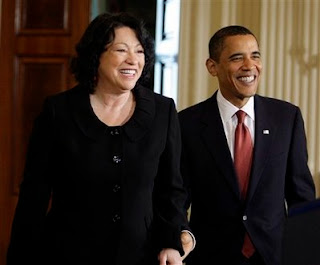 Saturday morning,
protected by the colossal frontal columns
of the nation's Supreme Court
that were once like prison bars
seeking to lock you out of its halls —
before the blinding glare
of flashing cameras
bouncing off adorned walls
absent any images celebrating
your likeness —
there you stood,
the Wise Latina.

Your confirmation hearing
the true identity politics,
the underpinnings of tilted scales,
an indictment of a racist patriarchal system
that stains justice
with its misogynist ways.

Opponents clamored to defame you,
attempted to relegate you
to a footnote in history,
dismissing you
as a child of affirmative action,
as another marginalized brown face,
like the ones they built the wall
along the Mexican border to keep out.

Your strength and poise made us proud
as we were fixated to television screens
at viewing parties
in skyscrapers and barrios,
inspired by your courage,
displaying your buttons and posters,
watching you deflect
the barrage of attacks
you bravely endured
to become the nation's
111th U.S. Supreme Court Justice.

The eyes of many Latinas y Latinos
filled with tears,
as their exuberant smiles
brightened the morning sky.

Your detractors never gained an advantage,
even in their failed attempts to diminish you.
They couldn't erase our illustrious past
or replace it with illusions of inferiority.
They couldn't write our Quinceañeras
or love for arroz, maíz y frijoles
out of our rich culture and heritage.

Carrying a legacy of struggle on your back
you transcended the tide of ignorance,
the protests and intimidation,
and rallying cries for your defeat.
The impotent Kyls, McCains and Sessions
couldn't change destiny,
they could only fulfill it.

It was the Wise Latina who prevailed,
who captivated the world.
Speaking loudly through your elegance
and quiet strength
you silenced your critics,
scattering them like the winds
of a fierce Summer storm.

At that moment
we all briefly touched the sky,
danced in the sun's warm glow,
and summoned the Ancestors
to celebrate your victory.

This poem was featured on the Latina Lista blog on 8/14/09. It was featured on La Raza Chronicles on 8/18/09 and most recently appeared on ¡LatinoLA! on 8/19/09. In the Fall the poem will be part of an exhibit at the Cesar Chavez Library, Chicano/Latino Studies Department, Michigan State University.

You can listen to an MP3 recording of Efrén reading this poem to celebrated poet, storyteller and independent media producer, Nina Serrano, on the show "La Raza Chronicles" below.


Posted by The Injustice Must End (TIME)